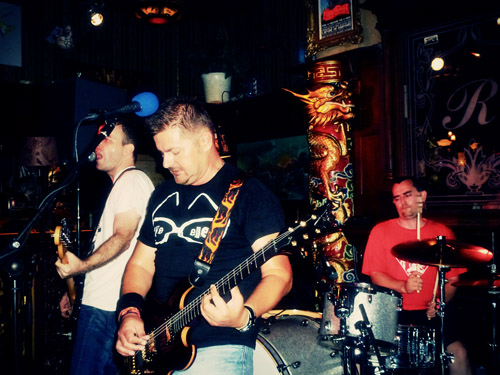 Although Berlin has several cool venues, White Trash Fast Food is definitely the coolest of them all. Already the first thing we saw outside the venue was this cool: END_OF_DOCUMENT_TOKEN_TO_BE_REPLACED

Honza has created a 12-minute videogallery with the Czech tour photos, and it’s cool. Check it out! END_OF_DOCUMENT_TOKEN_TO_BE_REPLACED

We spent most of Saturday on Pepa’s ranch. Pepa is the bass player of Z Ničeho Nic and he lives on a hill in the forest outside Strakonice. (A Czech guy with a beard who lives in the woods, sounds like Rumcajs, doesn’t it?) We got to taste his magic anti-hangover soup and some real cowboy chili. This guy knows how to live, he’s our hero. END_OF_DOCUMENT_TOKEN_TO_BE_REPLACED

Strakonice is the hometown of Z Ničeho Nic, so having the advantage of the home turf and the Friday date, we could expect a bigger crowd than in Prague, and so it happened indeed. The town is only 100 kms southwest of Prague, so we didn’t have to drive too much. Kremelka is a really nice club, and it’s one of those surprise venues where you wouldn’t guess from the outside that it’s there. END_OF_DOCUMENT_TOKEN_TO_BE_REPLACED

Our Czech mini-tour with Z Ničeho Nic started off in Prague at the Matrix club. The Matrix is a huge venue that could hold over a thousand people, and it has a great sound and atmosphere. We got there in time thanks to William’s cool new smartphone navigation system, and were greeted by Honza (Z Ničeho Nic singer) and Jirka, a friend of the band who volunteered to be our guide during these 3 days. (As it later turned out, he had just been out of hospital after being hit by a train, hence the nickname Train Buster.) END_OF_DOCUMENT_TOKEN_TO_BE_REPLACED