The Descendents were the Buzzcocks‘ equivalent on the early American hardcore punk scene: they were a lot more melodic than their contemporaries, and they were fronted by a nerd. But they were much more than that. They invented melodic hardcore (or melodycore), paving the way for NOFX, No Use For a Name, and almost every popular punk band in the golden years of Epitaph and Fat Wreck.
Despite being a punk icon, Milo was enough of a nerd to put his academic career before the band, so the Descendents have always existed in an on-and-off relationship, and their survival has been largely due to the enthusiasm of drummer-songwriter Bill Stevenson. Luckily, in contrast with fellow Californian punk-rock-frontman and Ph.D. Greg Graffin (of Bad Religion), Milo never felt the need to show off his academic background and pose as “punk rock professor”. You certainly won’t need a dictionary to understand the Descendents’ lyrics. Actually, they went as far as devoting a full album to toilet humor, which was probably a bit too far. (Enjoy! from 1986, probably their worst album.)
Although they maintained their standards during the years (well, apart from Enjoy!), their first two albums, Milo Goes To College and I Don’t Want to Grow Up are arguably the best ones. Interestingly, the best songs (Suburban Home, Kabuki Girl, Bikeage, Silly Girl, Christmas Vacation, Good Good Things) are on the B side on each.
We love to play Kabuki Girl live, and it always works, even with kids who don’t know the original. We also used to play a cover of 13 Stitches by NOFX, which is (partly) a tribute to the early Descendents. As for our own songs, Outliving The Enemy was just as much influenced by the Descendents as the Buzzcocks. 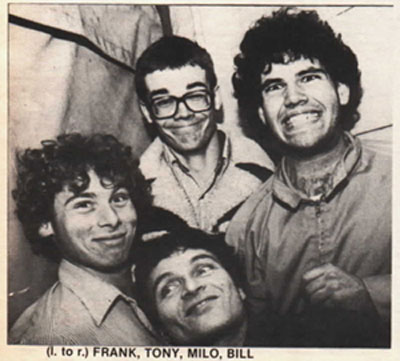