When MySpace got big around 2005, a lot of bands decided to center their web presence around their MySpace profiles, and abandoned their own websites. It seemed like the best and easiest way to present your band. All the other bands you liked were there, the labels were there, the zines were there, and most importantly, your audience was there. Three years, and about a billion friend requests later the audience had enough and decided to leave.
Here’s what’s been happening for the past two years: 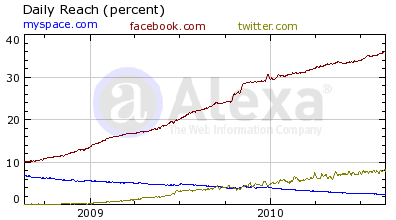 MySpace have been desperately trying to mimic Facebook lately, but their efforts have been futile: the exodus didn’t stop, as some recent news indicate. So, is it “Goodbye, and thanks for all the adds!” then? Not really. MySpace will surely be around for a couple of more years, but bands shouldn’t waste too much energy on it any more.

Actually, we don’t suggest shifting the focus to Facebook either. Social networks come and go. Get your own blog engine based website together (we use WordPress), and update your MySpace, Facebook, Twitter, Tumblr, last.fm, or whatever social network status with your blog feed instead. You will keep full control of your own contents and you won’t depend on Rupert Murdoch or Mark Zuckerberg. DIY is always the best option, even if it takes more effort.