We have a new song! Astrolena is a high-energy sci-fi themed punk rock song about an intergalactic love story during an alien invasion. It’s already available on YouTube and Bandcamp, and will be available on Spotify, Apple Music and other online platforms from 29 Apr.

2021 was our 25th Anniversary Year, and we were looking forward to good times with Hello 21.

We wanted to play gigs again, and hoped the pandemic would finally end and things would return to normal.

While we were spending our time in lockdown digging up old photos from our past to celebrate the anniversary, our old singer Michael was languishing in a Chinese prison cell, where he was held on bogus spying charges. We were following his ordeal for over two years, hoping he’d be released finally, but in March he had his trial and it was clear that unless a compromise was reached in the following months, he’d stay in prison for a very long time. Time was running out, and we thought we had to do whatever we could as a band to help his cause.

By June, the song “The Plane To Toronto” was born. We recorded it and released a lyric video. We got significant media attention in Hungary and Canada and the overwhelmingly positive feedback inspired us to take this a step further, and in August we put together a collaboration music video with people around the world standing up united for Michael’s release.

A month later, Michael was released. He was listening to the song on the way back from the airport and called it the soundtrack of his liberation. This was the most defining moment of our 25-year career.

Although the pandemic nightmare is still not over, we did get to play 3 really good gigs this year (the one in Instant was maybe our best gig ever) and our song Christmas Is Canceled was featured in the horror comedy Black Friday (featuring Bruce Campbell of Evil Dead fame).

Our 2021 Spotify stats have been even more impressive than last year, it’s mind-blowing that over 80K people in 104 countries have listened to our songs.

Keep on listening to them in 2022 as well! Happy New Year! 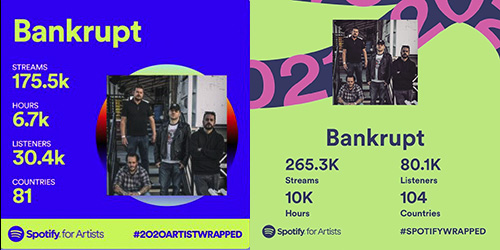 Yesterday we played our first gig following a 19-month hiatus due to the pandemic. It was a blast. Check out the gig photos in the gallery! We’ve also updated the press photos. Photo credits: Nothern Lights Photography – Norbert Pandur-Balogh.

Our former singer Michael Kovrig has been arbitrarily detained in China for almost 1000 days. We released the song The Plane To Toronto in July to raise awareness of his situation. The overwhelmingly positive feedback we received inspired us to take this project a step further. We invited people from around the world to collaborate with us on a music video for this song. We wanted to demonstrate that people around the globe are willing to stand up for Michael and send a clear message to all governments involved. This nightmare has to end. We want Michael to be released, now.

We have received over 60 videos from 15 countries of 4 continents. From Times Square to the Red Square, from the beaches of Australia to the mountains of Colorado, from the Eiffel Tower to CN Tower, people of various age, nationalities and backgrounds stood in solidarity with Michael. And we won’t stop until Michael’s free.

We invite everyone to create selfie photos or videos holding our Free Michael Kovrig poster or a handmade one and upload it to Instagram / Facebook / Twitter with the hashtag #freemichaelkovrig
You can also send them to us, and we’ll share the best ones.

And please, share this video too, help us spread the message. The more people we reach, the sooner we have a resolution.